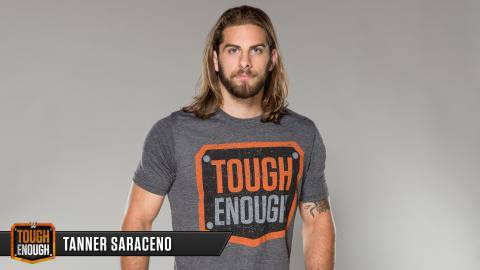 Ladies and gentleman Zonawrestling, in the person of Walter Farinella, has the pleasure to interview Tanner Saraceno, one of the most important competitor of this WWE Tough Enough's season. He analyzed with us all his journey: outspoken words again ZZ, his plans for the future (hoping in an NXT contract), who deserve to win Tough Enough and much more. Enjoy.

W: Ladies and gentleman here we are with Tanner Saraceno, one of the most important competitor of this WWE Tough Enough’s season. Hello Tanner, can you introduce yourself to the readers, talking for example about your MMA background? And a curiosity: your name sounds Italian. Do you have Italian origins?

T: Hello Walter and everyone. I am half Italian and half Irish. I started in wresting when I was 14 and transitioned to MMA following my collegiate career at Limestone college. I've been training MMA since I was 21, but made a full commitment to the sport when I graduated in 2014, when I was 23.

W: Why do you decide to compete in Tough Enough, even if you were into MMA? When did you start to be a Pro Wrestling fan? Do you have a favorite wrestler?

T: I was recruited into it and I looked at it as a great way to be involved with one of the largest sports entertainment industries in the world. I've been a fan since I was a kid, around 5 years old. Then I decided to join sports through out my adolescent years and rediscovered my love for it when this opportunity arose. My favorite wrestler is the Rock because of his ability to excite the crowd and engage them with body language and a powerful stage presence.

W: I see, The Rock is one of the best ever. You proved, since the day one,to be an amazing athlete. How was your 1st approach with Pro Wrestling training? Is it tough? And how did you feel to train in a place like the WWE Performance Center?

T: My first approach was fairly natural since there is a lot of cross over from my amateur wrestling and MMA training. The physical exertion and coordination are very similar. Yes, WWE training is tough, it talks a lot of athletic ability to use high velocity while controlling your body to keep the other person safe. The facility was mind blowing and I hope it happens again soon. The caliber of athletes that train and coach there are excellent at what they do and it was an honor to learn from them.

T: Maybe Dana White doesn't fully understand the capacity that the WWE athletes push themselves mentally and physically to entertain the fans. Every bump and chop that these superstars take is completely real. And the WWE has a very loyal fan base that want to see their favorite superstars perform live.

W: Talking about chop, you had the “honor” to be chopped by The Big Show. Changing topic, let’s talk about the Barracks. How was to live there, constantly filmed by WWE cameras, sharing the place with people that at beginning you did not know well? And what about your relationship with Chelsea?

T: It definitely took getting used to, getting filmed 24/7! Especially when the people in the house were all very diverse in their backgrounds. Chelsea and I are friends and we enjoyed our time together.

W: At one point of your experience you did various public appearances: for example when you had the opportunity to be on Raw, attending to various NXT Live Event or visiting the Universal Studios. First of all I ask you how was to be in the Backstage of Raw, seeing how the show works and meeting all the Superstar and Divas. Secondly, how is for you to be recognized in the streets by the WWE Universe? At Universal Studios you met a lot of fans.

T: It was an unbelievable experience that I will never forget. Especially when the superstars took the time to offer us guidance and motivation in our careers. It was very humbling to feel the impact that I have already had in the WWE universe, and I hope to continue put a smile on the faces of all the fans I meet.

W: How do you respond to those saying your personality was not good enough? How did you feel to lose against ZZ, a guy that you described as lazy? Also the judges and the coach blamed him week after week because he did not improve enough during those weeks. On the other hand you learned in the ring stuff and training methods, then you improved in both, gaining also a good amount of weight.

T: I feel like my personality matches up well with what the WWE is searching for in its athletes but I struggled using my body language and verbal communications to show what I am capable of. This is easily solved if I committed to acting classes and learned to have a stronger stage presence. It was very difficult to lose to someone that has such a terrible work ethic and even less talent in entertainment. The show was designed to find WWE talent, not looking for who you think is a "nice guy".

W: How was your relationship with the coaches Billy Gunn, Booker T and Lita? And what is your opinion about the three judges? In particular, Daniel Bryan appreciated you since day one, but he did not save you last week. You would be in the competition now and ZZ would be at home. What do you think about Daniel Bryan’s decision to not save anyone in this competition?

T: My relationship with the coaches was very positive! They were always willing to answer questions and help anytime I needed extra work. I thought they were all great judges. I always liked Daniel Bryan because I felt like we had a lot in common. I don't have any hard feelings about him not using his save because he put his trust in the WWE universe to make the choice.

W: What do you think about in general about the 4 finalists? Who deserve to win?

T: I think Josh and Amanda both deserve to win. They have the work ethic, the look, and the ability to perform well in the ring.

W: What are your plans for the future now? Do you already know how to move to continue your career in Pro Wrestling? Did someone in WWE give you any advices about that? And, there is the possibility to do an NXT tryout soon, trying to obtain a development contract?

T: Right now I am taking time to gain perspective and discover what is the best next step. I will wait until the show is over before contacting the WWE unless they contact me sooner with an offer. I spoke with my Tough Enough coaches and they've offered to help guide me to the next level of this sport when I am ready.

W: We are finishing, if you want say something to your Italian fans and in general to the WWE Universe around the world.

T: I want to say Thank You for all of the support and votes! You will be seeing me again soon! Please follow me on my social media accounts: Instagram is Hammer_saraceno and my Twitter is ToughTanner. My FB fan page is Tanner "The Hammer" Saraceno.

W: Thank you Tanner for your time, I wish you the best, hoping to see you in WWE again.

T: Thank you for having me Walter!